skip to main | skip to sidebar

Hope This Never Gets Out

Alan Keyes is a Crazy Person

By Keyes' estimation we only have about 4 years left to enjoy the US of A so live it up! What happened to this guy? I know he's always been on the fringe, but he's really gone to the zoo now.
Posted by Ryan at 11:58 PM No comments:

That was special. The first black President of the United States is Barak Obama. He swore the oath of office on the same bible President Lincoln swore his oath. President Obama will be living in the White House which was built by slaves. This inauguration day's historic significance has been proclaimed countless times by countless talking heads since November 4th, but I am still struck by it. January 20, 2009 was a day for Americans to be proud of their country.

I've always been sappy about America. I don't think the US is without it's faults, but despite those faults my national pride has always heavily outweighed any embarrassments I may have. If election day is the super bowl of politics and government, inaugurations are the trophy presentation. They are the celebrations of accomplishments past and present.

President Obama gave a bit of a somber inaugural address which I found appropriate for the time we are living in. I thought he ended the address particularly strong.

"Let it be said by our children's children that when we were tested we refused to let this journey end, that we did not turn back nor did we falter;" was probably a reference to our current economic hardships, but to me and I can hope to President Obama it also means the idea of America--a country that leads by example and does what is right even when it is not the easiest path or as a previous president liked to say, "a shining city upon a hill."

This shining city has lost much of it's luster over the past eight years. I hope President Obama and the rest of the elected representatives in Washington can once again give Americans a country to be proud of without a hint of embarrassment or reservation.
Posted by Ryan at 2:27 AM No comments:

How do either of these clowns sell any books? American conservatives would be better off in a world without Ann Coulter and Bill O'Reilly. Both are guilty of being bold fresh pieces of bullshit.
Posted by Ryan at 4:48 AM No comments: 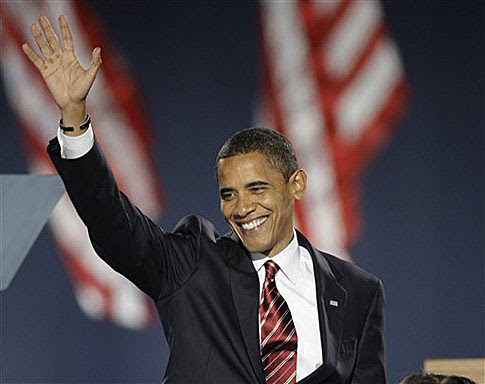 I didn't vote for him, but it is still a good night for the United States of America.

Hopefully I cast the wrong vote and President-Elect Obama is indeed the right man for the job.
Posted by Ryan at 2:40 AM No comments: 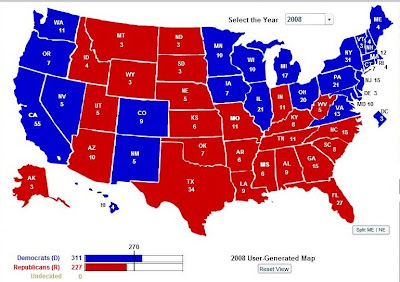 To anyone paying close attention to this race the above audio isn't a surprise. Senator Obama believes in the redistribution of wealth. Does this make him a bad person? No. Does this make him unamerican? No. However, I do have a problem with his attempt to conceal this belief from the American voters. It is just as bad as President Bush concealing he was a big government advocate during the 2000 campaign.

This revelation also underlines the worries about his lack of a record. Who is Barack Obama? It was arguably a racist and fear mongering question before, but now it suddenly becomes a very legitimate question. What other economic, social, or judicial philosophies is he trying to keep under wraps until November 4th?

The Obama campaign should be thankful for their large lead at the moment. They should also be thankful this didn't come out earlier this month. I think it will narrow the race. The huge blowout that seemed inevitable is now unlikely. Undecided voters are going to break for Senator McCain in a big way.

Making up 7-8 points in a week is a tough needle to thread. I doubt it can be done, but this race sure got a lot more interesting.
Posted by Ryan at 12:59 AM No comments:

Things You Should Read

Bloggy Roll (because everyone has one)